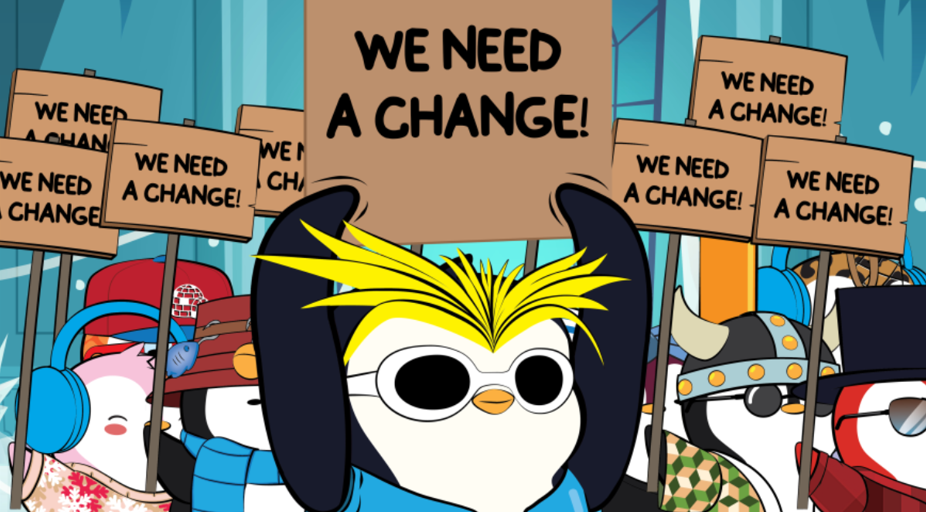 The Pudgy Penguins collection of 8,888 Ethereum NFTs has been sold for 750 ETH, or roughly $2.5 million, to Netz Capital’s Luca Netz, who’s now leading the project and will receive all future royalties from secondary sales.

NFTs like the Pudgy Penguins are unique blockchain tokens that signify ownership over an asset—in this case, an image of a penguin.

“Looking forward to spreading love across the Meta,” Netz said of the acquisition, which was made public on Saturday.

The sale comes just a few months after the project voted out prominent and controversial founder Cole Villemain, who goes by the name “ColeThereum.”

Netz made public in January his offer of 750 ETH, writing, “Make your move ColeThereum.”

ColeThereum confirmed to Decrypt via Twitter DM that he and the three other founders were no longer involved in the project.

“The original team wanted to see our creation go to the next level and we felt Luca has the connections and experience to do that,” Cole told Decrypt.

While the sale might seem like exciting news for holders, others have raised concerns, claiming Netz wasn’t a well-known figure in the Penguins community before the acquisition.

The Pudgy Penguins collection has a troubled past. On December 11, a former community moderator named ColdPizza—previously known as 0xDarth—publicly exited the project after being promoted to community manager without coming to an agreement on job terms, including compensation.

ColdPizza openly criticized ColeThereum’s leadership in a Twitter Space with 3,000 listeners, alleging that Cole bribed him with 1 ETH ($3,500 at time of publication) to not further disclose any more information about the Pudgy Penguins project.

(4/7)- Darth felt he wasn’t appreciated for his role as mod and was underpaid- He revealed shady practices, notably that they launched a hiring process with no intention of hiring anyone as a marketing stunt- @ColeThereum bribed him 1 eth to stay quiet about the situation

“I have never and would never bribe anyone,” Cole said in response to the allegation. “We let go of one of our staff members and I offered a 1 Ethereum bonus for being helpful to the project. It was taken out of context and false rumors spread.”

Known Pudgy Penguins whale 9x9x9 previously criticized Cole’s leadership, writing in a lengthy Twitter thread that the project was a “sinking ship” and they weren’t interested in buying the collection for 888 ETH in part because the project’s wallet was empty.

“Cole is the reflection of the lack of trust and transparency between the founders and community of the project. Removing Cole is like eating a painkiller when you have cancer,” they wrote.

On Christmas, some in the Penguins community were disappointed by the reveal of a new companion collection dubbed Pudgy Presents—mysterious eggs that hatched into fishing rods, initially called “rogs,” a term many on Twitter have used as a pun for “rug” and “rugged,” referring to getting “rug pulled” or scammed.

In January, some Pudgy Penguins holders sought a way out of the project because they disagreed with leadership. This led to the creation of the Wrapped Penguins on Metadrop. Per the Metadrop site, it allows “existing Penguins holders to be able to wrap their Penguins into a new collection that doesn’t pay royalties towards the team.”

Some involved with the Penguins project have speculated that Netz’s acquisition may have been a legal exit strategy for the founding team, but are fearful of publicly criticizing the project because of possibly violent retaliation. The original team had promised a Pudgy Penguins game, token, and other products as part of its “roadmap.”

“I tried to warn everyone how much of a scammer Cole was,” one community member told Decrypt on condition of anonymity. “If they sell the company, law enforcement can’t say they didn’t try and follow through on [the] roadmap and promises. I’m thinking it was a purely legal thing. Otherwise they would have just kept it.”

While perhaps the Pudgy Penguins don’t qualify as a rug pull, the Justice Department has started taking action against founders who don’t deliver on promises. Last month, it charged the two founders of the Frosties NFT collection with wire fraud and money laundering after they collected about $1.1 million in profits and then immediately abandoned the project.

When asked by Decrypt for comment on the scam allegations, Cole responded again via Twitter DM: “A scammer would leave people with something worthless, but look at the 3 projects I have been a part of creating … they all are worth many multiples of the mint price and have been very influential in the NFT scene.”

Cole said he’s no longer affiliated with any of those three projects but “supports them as a community member.”

“I consider myself more of a creator than a builder, and I am okay with that,” he wrote, going on to add: “I am confident projects I was a part of creating will still be here in 5 years, and they are far from scams.”