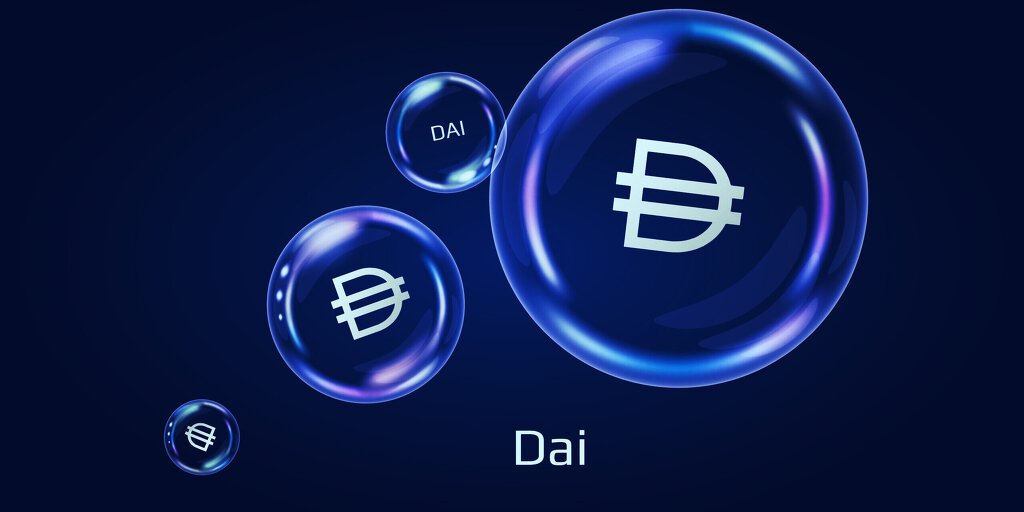 Pegged to the U.S. dollar and backed by a variety of cryptocurrencies, DAI has a special place in the heart of crypto enthusiasts. Unlike its larger, more centralized counterparts like Circle’s USDC and Tether’s USDT, DAI cannot be blacklisted, censored, or shut down. It is truly cut from the same cloth as Bitcoin and Ethereum.

Dai is the fourth largest stablecoin, with a market cap of over $8 billion. Tether and USD Coin have market caps of $72 billion and $33 billion, respectively.

Back in March 2020, amid Black Thursday when the entire market (including the S&P 500) went down the drain, Maker nearly collapsed.

When volatile assets like Ethereum are backing stable assets, liquidations are always a risk, even if the backing is over-collateralized. And following a cascade of liquidations on Maker, the protocol was pushed to the brink, and DAI lost its peg to the dollar.

Some of the key reasons it survived included an emergency debt auction that sold new MKR, Maker’s governance token, for DAI, adjusting system parameters to prevent cascading liquidations in the future, and adding USDC as a collateral type.

That last part, adding USDC as collateral, was the most controversial change to Maker. This is because it immediately raised two important questions: (1) how decentralized is DAI really if it’s backed by centralized cryptocurrency, and (2) why wouldn’t DAI users just buy USDC?

These issues became even more problematic since, after adding USDC as a collateral asset, the centralized stablecoin eventually became the primary form of collateral (i.e. greater than 50% of all collateral) backing DAI. Yikes.

Out of this debacle sprung myriad new decentralized stablecoins attempting to be even purer than DAI. Many flopped, but others have found traction.

This week, though, many of these questions around DAI’s level of decentralization were answered.

According to data pulled from Dai Stats, a site that tracks various metrics behind DAI, Ethereum is now in pole position as the primary collateral asset for the decentralized stablecoin.

Naturally, this also means that should we encounter another massive crash akin to Black Thursday, the protocol will be in for a bumpy ride. As much as enthusiasts love Ethereum, this does not make it nearly as resistant to volatility (and liquidations) as USDC.

Rune Christensen, the project’s founder, took to Twitter to celebrate the news of ETH’s return to DAI, adding that DAI’s market cap rose by 1.4 billion during the month of October—“all before Staked ETH and Direct Deposit Modules have come online.”

On October 29, Maker voted to add stETH as a form of collateral. This token, stETH (or staked Ethereum), is the receipt token users receive when they deposit their ETH into Lido, a type of “liquid-staking” protocol that allows users to earn yield while remaining, well, liquid through said receipt token. (By the way, this also allows users to participate in the blockchain’s transition to ETH 2.0). Unlike staking ETH directly on Ethereum, which has a minimum staking threshold of 32 ETH, Lido lets users deposit any amount into the project’s larger staking pool (which is deposited on Ethereum).

Anyway, the tie up with Maker and Lido means you can now borrow DAI with stETH, then take that DAI and continue participating in various DeFi activities.

It’s a mechanism we’ve seen before in DeFi, but it’s now possible using a rather battle-tested protocol rather than some janky yield farm.

Called “D3M” for short, this module is made possible through a tie-up with lending protocol Aave. Its main objective is to normalize highly volatile interest rates, a source of risk for many users. People who borrow on Aave, for example, may enter a position with a rate of 2%, but could find themselves paying something much higher, like 11%, down the line.

These rates change as a function of supply and demand. As liquidity dries up due to high demand from borrowers, the interest rate to borrow will also rise. When demand drops, alongside rising liquidity, these rates will drop.

For depositors, high borrow rates are great as they’ll earn higher interest on their holdings. Low borrow rates have the opposite effect.

The target rate that D3M will aim for is 4%, just like how the Federal Reserve has a long-term inflation target of 2%. This means that though borrowers will forego 1% rates, they also remove the risk of encountering double-digit interest rates on the other side. The same goes for depositors too. (In exchange for giving up double-digit rates, they’ll always be earning at least 4%, beating inflation.)

It’s an interesting little adjustment that will play a huge role in the health of DAI, DeFi, and all the DeFi protocols that use DAI.

For a more detailed unpacking of how D3M, I recommend checking out this Twitter thread and this one too.

DeFi Friday is Decrypt’s Friday email newsletter, led each week by this essay. Subscribers to the email get to read the essay first, before it goes on our site. Subscribe here.

How To Use Phoenixminer | Step-by-step Guide