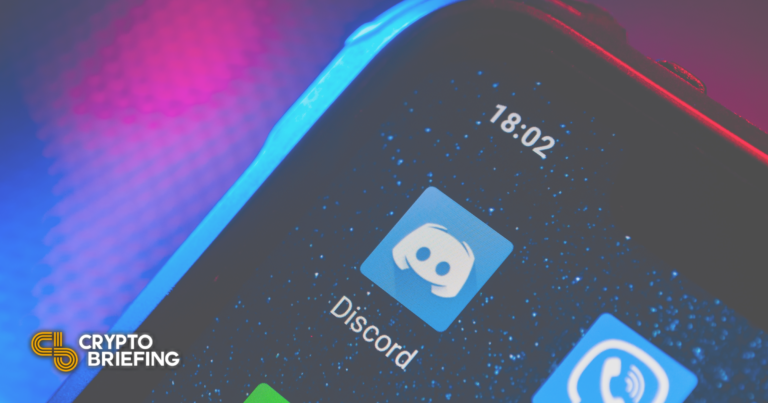 Discord’s CEO Jason Citron has said that the app has “no current plans” to integrate Ethereum.
This week, Citron suggested that Discord may support the smart contract blockchain, prompting a backlash from many users.
Many Discord users have continued to air their concerns following Citron’s latest update.

Discord is pausing its crypto plans after heavy resistance from users.

Discord founder and CEO Jason Citron has suggested that the platform will pause its plans to integrate Ethereum wallets. In a Thursday tweet, Citron wrote:

“Thanks for all the perspectives everyone. We have no current plans to ship this internal concept. For now we’re focused on protecting users from spam, scams and fraud. Web3 has lots of good but also lots of problems we need to work through at our scale. More soon.”

The post followed a Tuesday tweet in which Citron suggested that the messaging app may be integrating Ethereum, potentially paving the way for users to exchange NFTs and ERC-20 tokens in the Discord app. Citron teased a screenshot that appeared to show an interface allowing users to connect to Ethereum via the Web3 wallets MetaMask and Wallet Connect.

While the crypto community applauded Citron’s implication of the shift to adopt Ethereum, many Discord users opposed the move.

Disgruntled users posted a variety of complaints in response to the update, claiming that integrating Ethereum could increase fraud incidents on Discord. They also pointed to the alleged environmental impact of minting NFTs on Ethereum. “Even if we put the environemental impact aside, this whole thing is a big nonsensical scam and money laundering scheme,” a Twitter user going by the name FranckyFox2468 wrote.

A thread on the official Discord subreddit titled “Discord developers: Please do not support NFTs” also received hundreds of replies, many of them sharing complaints about NFTs.

Following Citron’s latest update that Discord would be putting its crypto plans on hold, many users responded with further grievances. On the Discord support page, multiple users posted messages indicating that they would cancel their Discord Nitro subscriptions due to the app’s apparent interest in NFTs. Meanwhile, Citron’s tweet received hundreds of replies slamming his indication that his refusal to rule out a move to support NFTs in the future. “This is a fancy way of saying “We’re waiting until the heat dies down.”” wrote Dani Sylvini. “I say, keep the heat on. If anyone dropped Nitro over this, keep it withheld. If you don’t have Nitro yet but object to this, hold off.”

Among the respondents was Uniswap founder Hayden Adams, who wrote that some of the replies were “pretty surreal,” but that he thought “misunderstanding and fear” surrounding NFTs will endure despite Ethereum’s upcoming Proof-of-Stake and Layer 2 updates.

Some of the replies to this are pretty surreal, and a good reminder of how early in web3 we are

PoS + L2s will fully address environmental concerns over the next year imo, but the misunderstanding and fear will be around much longer https://t.co/ookaLiZdSe pic.twitter.com/tPgyJvOnVN

Discord is the most widely used social network for gamers, with a monthly active user base of around 150 million. If it follows other social media networks, NFTs and in-game items could potentially be a large growth catalyst for the company. However, based on the latest developments, it’s clear that many users are strongly opposed to the technology.

Disclosure: At the time of writing, the author of this feature owned ETH and several other cryptocurrencies.

Discord founder and CEO Jason Citron teased plans for the app to implement Ethereum and NFTs on Twitter yesterday. The move, however, was met with backlash from many community members,…

Reddit, one of the largest content aggregators and social media services, may soon be launching a platform for users to buy and sell non-fungible tokens (NFTs). The company is hiring…

Twitter is assembling a crypto team to explore Web3 applications, according to statements made by an individual within that team. Web3 Is the Next Step of Twitter’s Crypto Efforts Jack…

Polkadot Holders Are Backing Acala and Moonbeam for Parachains