Digital Ruble to Give Russians What They Need, Bank of Russia Governor Says – Finance Bitcoin News 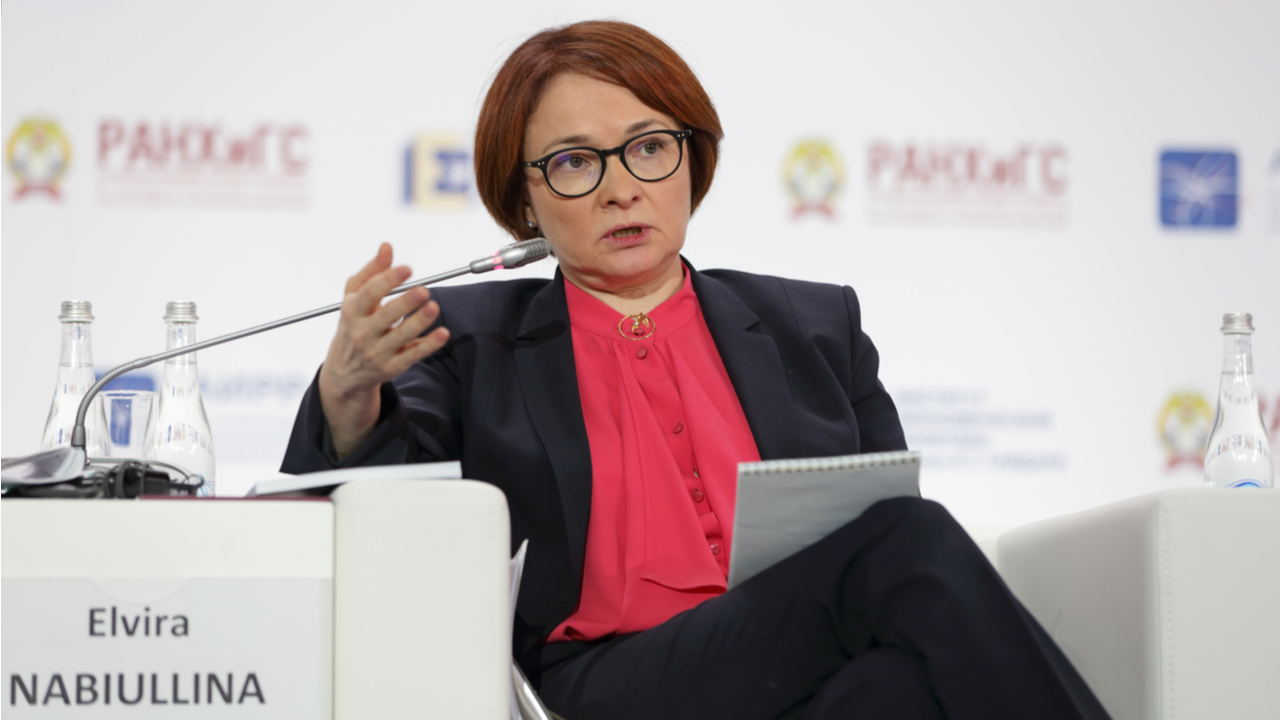 The digital ruble is what Russian citizens need as it will facilitate inexpensive and reliable payments, the head of Bank of Russia, Elvira Nabiullina, told participants in an international banking forum. The governor also warned that cryptocurrencies and fiat-backed stablecoins create risks for financial stability.

The Central Bank of Russia (CBR) takes very seriously cryptocurrencies and stablecoins as they pose risks to the financial stability of the country, the head of the monetary authority said during a conference organized by Bank of Finland’s Institute for Emerging Economies. Russia takes a cautious view on both of these types of private tokens, Elvira Nabiullina told the audience via a video call while also sharing the Russian perspective on central bank digital currencies (CBDCs).

The entrance of cryptocurrencies and especially global stablecoins into emerging markets may increase currency substitution, crowding out fiat currencies, Nabiullina elaborated. As a result, financial stability risks may increase while the monetary transmission mechanism may weaken, the high-ranking official added during her presentation devoted to Russia’s digital ruble project. She further emphasized:

That’s why we think that CBDC is the proper solution to give people what they need – a cheap, reliable, and protecting personal data solution for payments.

The executive remarked that Bank of Russia does not allow the use of private cryptocurrencies in the Russian payment system. Her statement reiterated the regulator’s long-standing position against permitting the free circulation of bitcoin and the like, which it often calls “money surrogates.” The central bank maintains that under current Russian law the ruble is the only legal tender.

The digital ruble, the third incarnation of the national fiat currency after cash and bank money, will also have legal tender status, which means it will be mandatory for merchants to accept it, Elvira Nabiullina explained. The Russian Federation is now preparing to adopt the necessary legislation, launch a prototype, and begin trials with the participation of commercial banks and other organizations.

The chair of the CBR described the transition to CBDCs as a significant development. In her opinion, the state-issued digital currencies will facilitate more advanced, as well as cheaper — which is important for Russia — payment solutions. They also promise to simplify and accelerate cross-border transactions in the longer run, Nabiullina noted.

Bank of Russia started contemplating a CBDC in 2018 and after analyzing the pros and cons, decided to explore the possibility of issuing a digital ruble last year. A consultation paper was published in October with a long list of questions to gather feedback from the financial sector and other stakeholders. In April, the authority released a digital ruble concept outlining the CBDC’s principle architecture.

CBDC Wallets to Be Linked to Identities of Holders

The digital ruble will be a retail CBDC and all individual wallets will be opened on Bank of Russia’s balance sheet and on a centralized ledger operated by the CBR. Commercial banks and other financial intermediaries will provide access to customers’ wallets through their apps. Due to anti-money laundering considerations, cash-like anonymity is not an option, Nabiullina stressed, adding:

We shall also keep in mind that the flip side of anonymity is a much greater exposure to fraud of all sorts.

“The digital ruble wallets will be linked to the identities of their owners, thus from the standpoint of access mechanics, this clearly fits in the definition of an account-based system,” as opposed to a token-based solution where the formula involves knowing the key to an anonymous account, the central banker detailed. Nevertheless, it will be possible to tokenize the currency in the account-based wallets.

According to the CBR official, there’s a strong consensus that the design of the digital ruble should put an emphasis on its use as a medium of exchange while limiting its appeal as a savings vehicle. “With that in mind, the Bank of Russia made the definitive decision that the digital ruble will not be interest-bearing” in order to avoid competition with bank money in the savings space, Nabiullina revealed. At the same time, she believes the digital fiat will challenge the banking sector’s monopoly on electronic payments, leading to lower commissions and higher interest payments.

To avoid bank runs, imposing a limit on the amount a person can transfer from a regular bank account to a digital ruble account “may be advisable,” the governor stated. Another option is to cap the amount of funds that can be stored in a single digital ruble wallet, she added.

Do you expect Russia to eventually issue a digital version of the ruble? Tell us in the comments section below.